Well, I finally did it: the Napa Valley Marathon, a year later than planned, definitely much more slowly, but with a wonderful running companion by my side the whole way and a pleasantly strong finish. Because I'm tired and writing this only for some closure, here's the brief version: 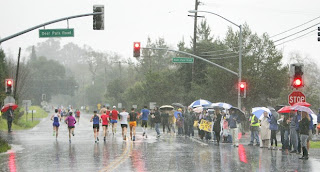 Photo: Napa Valley Register
Tips & thoughts for slow/first-time runners considering signing up for Napa:
Many thanks to:

Labels: If I can you can, Race Day, Wingman