Hey friends, I wanted to let you know that I'm hosting a giveaway over at my other blog. A US or Canadian resident will win $75 to spend at CSN stores.

Since you are kind enough to follow me here, just show up over there, mention that you're a 'Speedy' friend in your comment and I'll be pleased to enter you. For the remarkably gracious amongst you who follow both blogs, you're entitled to 2 entries, for sure.

The Joy of Blisters

I'm never particularly enthused by blog postings which start with an apology for the owner's absence. So let's just say skiing - knee - apathy - couch potato and you'll get the general idea.

When I first started Struggling to be Speedy, I anticipated a slow but stoic success story as I built my way from an 8-mile jog to a 26-mile epic. Much like any country that's ever declared war, I thought the whole thing would be over within 6 months and I could return, victorious, to a normal life. Instead, my naïve marathon plans became pathetically derailed at mile 18 and I've been struggling to maintain healthy lifestyle habits within my new limitations. 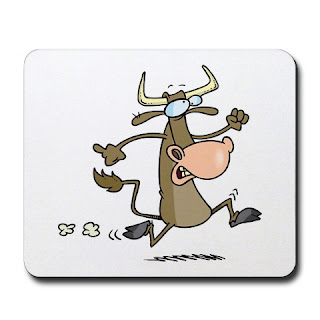 I never really 'marketed' this blog as I simply thought it would be fun to have a diary of my first and only marathon adventure. Frankly, I was surprised and more than a tad flattered that anyone at all would follow along with me. Hence, I owe you an update.

After 5 months of googling, pondering and expecting to wake up one day with a healthy knee, I finally went to the doctor last week. Disappointingly, but not surprisingly, she didn't really know much about it (I had already figured out that ice and Advil might be good allies). However, she did refer me to physiotherapy, so I am enormously hopeful that someone there will be able to prescribe the correct exercises to get me back into training.

Meanwhile, figuring I might at least give them something to work with, I did a 5 mile trot yesterday without serious pain - or at least, not in my knee. The massive blister on my left foot definitely comes under the category of too much information, but suffice to say, I was delighted that my most serious affliction was from such an unsinister cause. It's a strange sport indeed where you find yourself thrilled just because it hurts somewhere new...

I have mentioned before that I'm lucky enough to work for an employer who puts emphasis on health and well-being.

This week's offering, which I attended, was a Nutrition Workshop. More on that later. For now, suffice to say that before we got into the foodie merits of couscous versus quinoa, there was plenty of more general, upbeat encouragement to take care of ourselves, including inevitable exhortations to exercise.

Hah! I'm slightly ashamed to admit that kind of message is making me grumpy right now. Frankly, I was sitting there with my arms folded, thinking "Well, sure, I'd be happy to go out and run 30 miles a week if it wasn't for this pathetic knee." 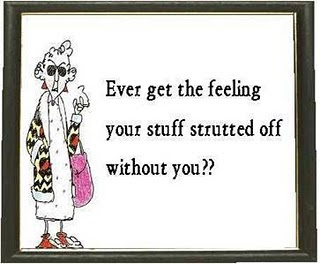 But of course, "I would if I could" is not actually the same as exercising.

Clearly I need to break out of my grump and find a routine with other forms of fitness which are effective and enjoyable. I do go regularly to a lunchtime Body Sculpt class, but even stationary lunges and squats are starting to bug my knee. Cycling is sort of OK, but I never work up to the kind of (an)aerobic levels that I was getting with running. Last weekend, I did manage 11 gentle miles on two wheels, although I suspect eating a cooked breakfast at the half-way point was not the smartest dietary tactic!

Anyway, enough whinging. We can all point to people who manage to exercise despite perceived barriers, including one who is missing a whole leg, never mind a funny knee. It's time for me to hit the road/pedals/oars and join them.

Catch Us If You Can

Depending on your point of view, you might think this race series is a whole lot of fun, or in very bad taste. Memorably named the Skirt Chaser, it's a 5km dash where women start 3 minutes ahead of men. The first athlete across the line, regardless of gender, wins the prize money. 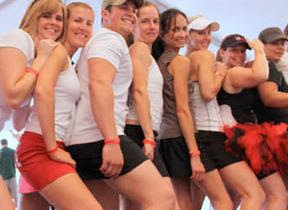 Me, I think it sounds like a great caper, regardless of whether you're being chased by someone special, a friend you have challenged, or are perhaps interested in meeting someone new on the course or at the party afterward.

Interestingly, looking at previous race results, it does appear that a woman usually wins, but only just. I'm pretty sure Beloved Husband would be able to catch me, but the question is, where? Knowing he's hot on my heels might just help me get more of a wiggle on than usual. It's a long time since I entered a 5km event, but with a pathetic knee in tow, that might just be my new race distance.

The next Skirt Chaser event seems to be in Atlanta in May, but I'm hopeful it will return to San Francisco this November. If this sounds like your cup of tea, you can vote to bring it to your city too.

Photo thanks: Convert to Skirt
Posted by Pauline Wiles at Friday, April 02, 2010 4 comments: